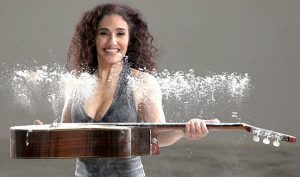 Virtuoso guitarist, singer, vocal juggler and songwriter, Badi Assad has emerged as one of the most versatile artists of her generation. With 18 albums released worldwide and over 40 countries visited, her 2006 CD Wonderland was selected among the top 100 by the prestigious BBC London  and was also included in the top 30 on Amazon.com.

Embraced by labels such as Verve (Universal) and eDGe Music (Deutsche Gramophone), she has performed at numerous international shows over the past two decades, including groundbreaking collaborations with Bobby McFerrin, Yo-Yo-Ma and David Broza, among others. Badi has also performed at some of the most prestigious international festivals, including North Sea Jazz (NE), Jarazum Jazz (KOR) and at theaters such as L’Opera de Paris (FR), Palais de Beaux-Arts (BE) and Metropolitan Museum of Art from New York (USA).

Some of their songs reached the Top 10 in Europe: their hit song Waves was featured on the soundtrack of It Runs in the Family, with Michael and Kirk Douglas. In 2004, with the release of Three Guitars, she toured the world with guitar legends Larry Coryell and John Abercrombie.  In 2005 she joined her brothers, parents and nephews for the live recording of A Brazilian Songbook and DVD Um Momento de Amor, by the Belgian label GHA.

In 2006, she started a new project with her brothers, the famous Duo Assad, masters of classical guitar. In 2007 Sofia, her first child, was born and Badi retired. Still under the effects of motherhood, she was responsible for the soundtrack of the children’s play Convocadores de Estrelas, by the group Seres de Luz, lent his voice to Barulhinho Ruim, theme song for the character Bel, created especially for the re-release of Vila Sésamo, on TV Cultura ( BR) and with Naná Vasconcelos composed the soundtrack for the documentary Children of the Amazon, by filmmaker Denise Zmekhol. In 2010 Badi released, through Biscoito Fino, the DVD Badi Assad, celebrating the first 20 years of her career. In the same period, Badi was invited to be the protagonist of the contemporary opera Ópera das Pedras, in São Paulo, directed by Denise Milan and the American Lee Breuer (Mabou Mines).In July 2011, the Assad Festival was created to honor the family’s work as ambassadors of Brazilian music around the world.The following year, she released Between Love and Luck, her first independent album for his own label, for which she received the award for Best Composer of the Year (APCA). Her song Pega no Coco won First Place for Best Song in World Music at the USA International Songwriting Competition.
In 2015, Badi was invited to work with the Chicago-based organization GATC (Genesis at the Crossroads), which is primarily focused on building world peace. With them Badi integrates, as a guitarist
and vocalist, the multicultural group Saffron Caravan, alongside Moroccan vocalist Aaron Besoussan, Israeli-Arab lute virtuoso Haytham Safia and Venezuelan percussionist Javier Saumme. In addition, she serves as a speaker at GTCA’s roundtables on arts and conflict transformation, as well as being responsible for the music program for the Genesis Academy Summer Institute, a leadership training and peacebuilding educational program for international youth from areas of conflict.

Derek Gripper is known for his groundbreaking technique for evoking the West African kora on the guitar. He has transcribed the complex music of Malian kora player Toumani Diabaté and infuses his interpretations of Bach’s music with lessons from the oral traditions of Africa. He has performed with Toumani Diabaté’s Symmetric Orchestra and classical guitar legend John Williams, and tours worldwide.

Since his two recordings documenting his translation of the works of Toumani Diabate, “One Night on Earth” (2011) and “Libraries on Fire” (2016) Gripper has been creating a body of original work around the theme of extended cyclical structures. Taking his cue from the improvisational language of West African griots, as well as returning to his early work re-inventing South Africa’s own cyclical ‘koortjie’ tradition, Gripper continues to expand the guitar’s harmonic and expressive potential inspired by the simplicity of the acoustic guitar, one of music’s most personal instruments.

His recent recordings, including “A Year of Swimming” (2020) and “Billy Goes to Durban,” (2021) dovetail between original compositions, spontaneous improvisation and recitations of works by composers like J.S. Bach, Arvo Pärt, Salif Keita, Fanta Sacko and Baaba Maal, bringing seemingly disparate traditions and musical practices together in a seamless guitar experience like no other.

As a teacher Gripper combines the techniques of oral tradition learning with the pedagogy of Maria Montessori and FM Alexander and teaches workshops online and in person as well as hosting a global guitar group online with nine lessons a week and numerous online courses.

It took Derek Gripper untold hours of painstaking work to transcribe note-for-note the complex compositions of Malian kora player Toumani Diabaté and find a way of playing them on six-string guitar. The results appeared on his ninth album, “One Night on Earth.” The album created an unprecedented meeting point between the written tradition of Western classical music and the oral tradition of the West African griots.

Critical acclaim was quick to follow. Classical guitar legend John Williams said he thought it was “absolutely impossible until I heard Derek Gripper do it.” Toumani Diabaté himself asked for confirmation that it was indeed just one person playing one guitar. Both invited Derek to collaborate with them: Derek performed with Williams in London’s Shakespeare’s Globe and King’s Place, and with Diabaté and his Symmetric Orchestra at the Acoustik Festival Bamako, Mali. His 2016 Carnegie Hall debut paired him with Mali’s Trio da Kali, and the UK’s Songlines honoured him with their award for the best album in Africa and the Middle East.