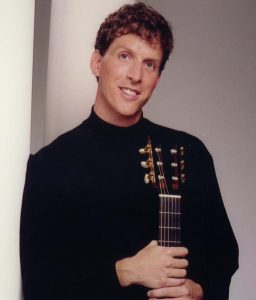 Guitarist Joseph Pecoraro is recognized as a highly-accomplished concert and recording artist, teacher and author. As a recitalist he appears as soloist, chamber musician, and with orchestra across the United States and abroad. Recent seasons’ schedules feature performances in France, Italy, Switzerland, Mexico, and across the U.S., including solo recitals at the Kennedy Center, the Washington Library, and the Chicago Cultural Center. These include appearances in Houston, Denver, Raleigh, Minneapolis, Chicago, Cincinnati, New York, Charlotte, Los Angeles, Atlanta, Miami, Charleston, Washington D.C., Paris, Geneva, and Bologna. He has performed as featured soloist with the Roanoke Symphony, Wintergreen Music Festival, and Winston-Salem Symphony Orchestras, numerous vocal ensembles, and collaborated with dozens of prominent singers and instrumentalists.

Pecoraro’s commercial recordings present stylistically diverse repertoire from around the globe. His most-recent releases include ‘Perennials’, which features world-premiere solo guitar works by noted American Composers, as well as the holiday recording ‘This Little Light’ with multi-Grammy-winning tenor Anthony Dean Griffey. He is also author of the widely-acclaimed music-reading text “Read this First”. In addition to his recital career, Pecoraro performs traditional Celtic-inspired music with violinist Katherine Wiley, plays jazz and fingerstyle guitar, and is an avid practitioner of the Alexander Technique.

Following his long-standing interest in excellent music-making at the community level, Mr. Pecoraro has been involved with teaching guitar students using the Suzuki approach for the past 20 years. He is a registered Teacher Trainer with the Suzuki Association of the Americas, offering courses in guitar pedagogy to teachers across the Americas. His UNCSA students have won top prizes in competitions sponsored by the National Foundation for the Advancement in the Arts, American String Teachers Association, Guitar Foundation of America and numerous regional solo and concerto competitions, and alumni have distinguished themselves as active performers, teachers and recording artists.