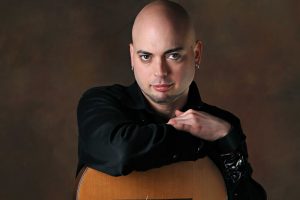 Todd Tipton has performed throughout the United States working with varied artists such as Bobby McFerrin, Bob Mintzer, Gary Burton, and Gregory Hines. He’s performed in unlikely places such as Baltimore Harbor Independence Day, Times Square, a Miss America Parade, a private memorial for a U.S. President, returning home of the troops, and retirement ceremonies for generals. Historical period instruments have placed him in the orchestra pit for both operas, and various chamber groups. Todd’s primary teachers were Jeffrey Van, Ricardo Cobo, Julian Gray, and Rodney Stucky. He received his Bachelor of Music from the University of Kentucky, and his Master of Music and Doctor of Music Arts from the University of Minnesota. He has taught at Eastern Kentucky University and The University of Minnesota where he more than quadrupled the size of the elective guitar program. He also built the most successful teaching studio in the Twin Cities. Todd currently owns and operates a thriving studio in Charlotte, NC where he has founded the new Charlotte Guitar Society.