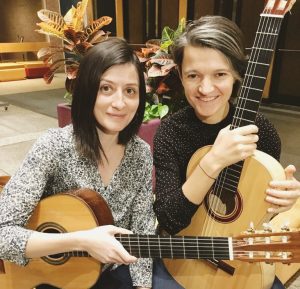 Maja won second prize at the Latin-American music competition in 2009 and was included on two compilation CDs in production at the Latin-American Music Center at Indiana University. She has also performed new music written for guitar by D. Freund and A. Travors as a duet and has been collaborating with numerous composition students of the Jacobs School of Music. Beginning in the fall of 2011, she has been appointed as guitar faculty at the School of Music, University of Minnesota in Minneapolis, MN.

Among the awards Milena has received for her work are the second prize for guitar performance at the International Guitar Festival, Kyustendil, Bulgaria (2006), the first prize at Guitar Open Festival in Subotica, Serbia (2010), and the second prize at Naissus Guitar Festival in Niš, Serbia (2010). In 2011 she continued her studies at Indiana University, and in 2014 she graduated with a Performer Diploma and Master’s Degree in Guitar Performance at the Jacobs School of Music, under the guidance of Maestro Ernesto Bitetti. Milena often performs as a soloist and in various chamber ensembles – guitar duo, duo with flute, violin and clarinet. Besides Serbia, she played in Bulgaria, Hungary, Italy as well as in the US, Indiana and Minnesota. Milena teaches beginner and advanced guitar classes and individual lessons, as a Teaching Assistant, at Indiana University and University of Minnesota.