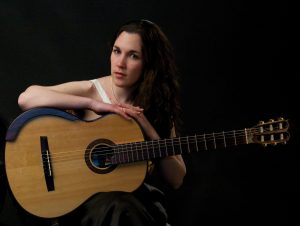 Mrs. Pomerantz-Amaral began her studies at the Rubin Academy of Music in Jerusalem, Israel, studying with Irit Even-Tov. She has won the Top Prize at Guitar Gems International Competition in Natanya, Israel, Second Prize at the 38th Fernando Sor International Competition in Rome, Italy as well as the special prize winner of ‘Best Interpretation of a Piece by Sor’ to name a few. She also received a scholarship from the ‘Keren Sharett American-Israeli Foundation Scholarship’.
Mia completed her studies at the renowned Peabody Conservatory of Music of the Johns Hopkins University in Baltimore, Maryland and was awarded a Master of Music and Graduate Performance Degrees under the tutelage of Maestro Manuel Barrueco.

In 2008, Mia and her husband – classical guitarist Jorge Amaral, formed Duo Amaral. Together they have toured in Italy, Germany, France, Switzerland, Poland, Panama, Mexico, Israel, Cyprus and the USA as performers and jurors, also offering workshops and masterclasses. They recorded three albums together – ‘Suplica’, ‘Textura’ and ‘KeyWest’, all which have received high accolades. Duo Amaral contribution to the guitar duo repertoire includes transcriptions and commissioning of new compositions, to be performed and incorporated into the classical guitar canon.

A devoted teacher, many of her students have placed as top prize winners for the past twelve consecutive years in some of the most prestigious national and international guitar competitions in the USA such as the Guitar Foundation of America, the Beatty Competition in DC and others. Her students were also selected to perform in Carnegie Hall in NY and open concerts for David Russell and others as part of the Marlow Guitar Series.