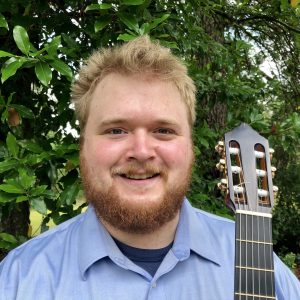 Austin Wahl is a native of Minneapolis, Minnesota. While still a student, he has been in demand for performance across the United States, Canada, and Mexico, having played recitals for the Great Lakes Guitar Society (NY), Minnesota Guitar Society, Guitar Hamilton (ON), and Festival Internacional de Guitarra en Lagos (JAL), among others.

He began study of the classical guitar at age five with Alan Johnston, a founding member of the Minneapolis Guitar Quartet. Subsequently, he earned bachelor and master degrees as well as a performer’s certificate at the Eastman School of Music in Rochester, NY, where he is currently a doctoral student of Dr. Nicholas Goluses.

In addition to his classical playing, Wahl enjoys numerous other styles of music. He won the 2009 youth division of the Minnesota State Fair Bluegrass Flatpicking competition, and has performed in a bluegrass band masterclass for internationally known banjoist Bela Fleck. At age 14 he also built a fully functional electric guitar (dubbed the “Wahl-o-Caster”) with a body of solid purpleheart, weighing in at nearly fifteen pounds.

Since the fall 2017 season, Wahl has led the bass section of the Mount Hope World Singers in Rochester, NY.