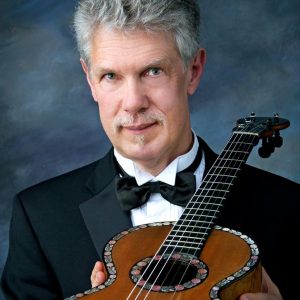 Douglas James has appeared as a classical guitarist throughout the United States as well as in Europe and Mexico. He has been a featured recitalist for such notable venues as the Guitar Foundation of America annual convention, Guitar-Festival Iserlohn, Stetson International Guitar Workshop, Oberlin Conservatory, New York’s Carnegie and Merkin Halls, and many more. He has won top prize in the Arturo Toscanini Solo Guitar Competition (Italy), and twice has been awarded a National Endowment for the Arts Solo Recitalist Fellowship. James often features 19th century instruments in his performances of the Classical and Romantic literature, and plays regularly in a period guitar duo with the Italian guitarist Pasquale Rucco.

James has recorded three critically acclaimed CD’s for the Cala Vista label. Douglas James holds the Doctor of Musical Arts degree from the University of Arizona where he studied with Thomas Patterson. Dr. James is Professor of Guitar at Appalachian State University, a past member of the Board of Trustees of the Guitar Foundation of America, and directs the annual Appalachian GuitarFest.