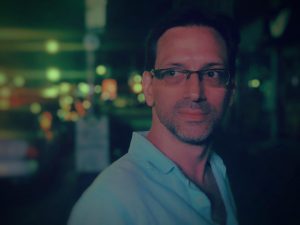 Brian DuFord began his career as a classical guitar soloist, earning degrees from the Mannes College of Music and Yale School of Music where he studied with Sharon Isbin and Benjamin Verdery, respectively. In 2002, after concertizing for nearly two decades, he exited the classical music field and embarked upon a new course as a composer in the entertainment industry. Then in 2009, after scoring numerous independent films and documentaries, he returned to classical music. Within a short period of time his compositions, described by critics and musicians alike as “innovative and creative”, “brilliant” and “very appealing” have been performed worldwide by acclaimed ensembles, garnering much attention, enthusiasm and praise.

Recent premieres include Coal Trails on Rails by Heather Killmeyer at East Tennessee State University, Beer Music by Black Marigold at the 2017 IDRS Conference and Five Moments Musicaux by Marina Alexandra at the 2017 New Orleans International Guitar Festival. Other notable performances include Notion of Commotion by Via Nova Chor and Duo d’Accord, Angels with Red Tails by Langley Winds, Variations on an Afro-Cuban Lullaby by Imani Winds and Vignettes Balletiques by Borealis Wind Quintet.

He, along with flutist Christopher Vaneman, is a founding member of the flute & guitar duo ECHO – described as “possessing extraordinary rapport and sensitivity” by guitarist Eliot Fisk. A dedicated teacher, Brian has given masterclasses, lectures and workshops throughout the United States and Europe including the Mannes College of Music, the Imani Winds Chamber Music Festival, the Hochschule für Musik und Theater München and the Tiroler Landeskonservatorium Innsbruck. A much sought after private instructor – his studio of young musicians, some of whom have developed careers in the music business, explore the finer points of classical, folk, blues and rock.