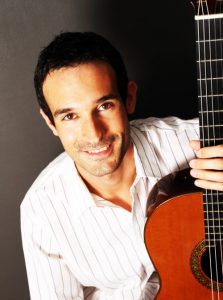 Born in Montevideo, Uruguay, Marco Sartor is a top prize winner in numerous international competitions, and has performed solo and chamber music recitals in three continents to critical and public acclaim. He has appeared with orchestras such as the Allentown Symphony, Virginia Symphony, Buffalo Philharmonic, Ann Arbor Symphony, and SODRE (Uruguay) among others. His debut solo recording for Fleur de Son Classics, “Red,” has received rave reviews and been broadcast on national radio.

Marco Sartor serves as Assistant Teaching Professor at Wake Forest University in Winston-Salem, NC. As an active pedagogue, he has given numerous masterclasses in universities and conservatories in the USA and abroad. He has designed and implemented successful guitar programs at the Carnegie Mellon Music Preparatory School in Pittsburgh, PA and the Charleston Academy of Music in Charleston, SC, and served as faculty for the College and High-School Divisions of the New World School of the Arts in Miami, FL.

Marco holds a Doctor of Musical Arts degree from Yale University, where he earned the Friedmann Prize for his doctoral thesis on Tango and its deployment in contemporary works. He also received degrees from the College of Charleston and Carnegie Mellon University. His former teachers include Robert Ravera, Mario Payssé and Eduardo Fernández in Uruguay, and Marc Regnier, James Ferla and Benjamin Verdery in the USA. Marco Sartor is an Augustine Strings Artist.